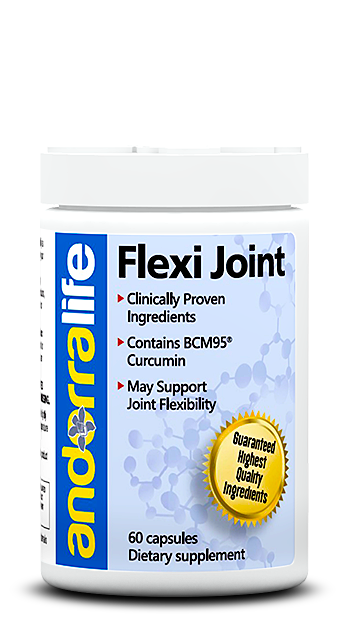 Smooth tissue known as cartilage and synovium, along with a lubricant called synovial fluid, cushion the joints so bones do not rub together. However, as the body ages, injuries naturally occur. Even sitting incorrectly for long periods of time, or carrying too much weight, can wear down cartilage. This process leads to damaged joints and ultimately arthritis.

Flexi Joint by AndorraLife uses the world's most preferred bioactive and bioavailable turmeric extract on the market in the form of curcumin. Turmeric extract enhances the bioavailability of curcumin by combining the curcuminoids and essential oils of turmeric. It also servers as powerful anti-inflammatory that supports healthy joints, liver functions, gallbladder functions, and anti-aging. The new formulation revealed that blood concentrations of free, unconjugated curcumin in micro-molar concentrations - approximately 7 to 9 times more bioavailablity compared to regular curcumin. Additionally, this curcumin was retained in significant amounts in the blood for up to 8 hours after an oral dose, which is required for any clinical benefit from ingested curcumin.

This extract comes from a plant in India that produces frankincense. It is considered a natural pain killer - even more powerful than Ibuprofen. One of the best-studied areas of Boswellia serrata is with osteoarthritis.

In another, similar, double-blind, placebo-controlled, randomized, crossover study, researchers divided 30 participants into two groups. One group received Boswellia serrata extract for eight weeks while the other received a placebo. The groups then had a wash-out period, then switched groups. The placebo group took the Boswellia for eight weeks while the original Boswellia group took a placebo. Researchers found that when the participants took the Boswellia serrata, they enjoyed less knee pain, improved movement, the ability to take longer and  further walks, and had fewer incidents of swelling. Additionally, there were very few side effects - only minor gastrointestinal upset in a handful of participants.

The use of willow bark dates back to the time of Hippocrates (400 BC) when patients were advised to chew on the bark to reduce fever and inflammation. Willow bark has been used throughout the centuries in China and Europe, and continues to be used today for the treatment of pain (particularly low back pain and osteoarthritis), headache, and inflammatory conditions (bursitis and tendinitis). The bark of white willow contains salicin, which is a chemical similar to aspirin (acetylsalicylic acid). In combination with the herbs and powerful anti-inflammatory plant compounds (called flavonoids), salicin is thought to be responsible for the pain-relieving and anti-inflammatory effects of the herb. During the 1800s, salicin was used to develop aspirin. White willow appears to bring pain relief more slowly than aspirin, but its effects may last longer.

Yucca is the common name for the more than 40 species of plants in the Yucca genus. The root of the non-flowering plant is used to make medicine, and contains chemicals that reduce arthritis symptoms such as pain, swelling, and stiffness.

This ingredient is host to a family of complex carbohydrates called mucopolysaccharides - the primary inflammation-fighting component. The naturally occurring forms of these compounds in shark cartilage (which are among the largest produced by any living cells) are more effective than the synthetically refined mucopolysaccharides. More importantly, when combined with the angiogenesis inhibition properties which are believed to exist in the proteins, shark cartilage may not only provide inflammation relief, but also inhibits the vascularization of cartilage which is often associated with advanced cases of osteoarthritis and rheumatoid arthritis in human joints. Inhibiting the formation of new blood vessels is the number-one basis for claims made for the ability of shark cartilage to successfully fight cancerous tumors.

The turmeric plant is the main spice in curry. It has a warm, bitter taste, and is frequently used to flavor/color curry powders, mustards, butters, and cheeses. The root of turmeric is also used widely to make medicine. Turmeric, or curcumin as its sometimes called, is an excellent anti-inflammatory, and is used for arthritis, heartburn (dyspepsia), stomach pain, diarrhea, intestinal gas, stomach bloating, loss of appetite, jaundice, liver problems and gallbladder disorders.