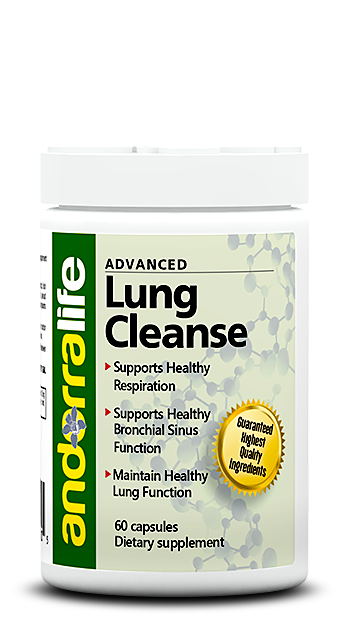 The lungs are different from other organs in the body in that their delicate tissues are directly connected to the outside environment. Anything that is inhaled can affect the lungs. Germs, tobacco smoke, and other harmful substances can cause damage to the airways and threaten the lungs ability to work properly.

The human body has natural defense system that are designed to protect the lungs. Normally, these systems work well to keep out dirt and fight germs. However, there are additional measures we need in order to reduce the risk of lung disease.

Like all active areas of our bodies, the lungs require a fair amount of vitamins to help them create new cells, repair DNA, and fight damage caused by oxidation. In addition to a healthy diet, consuming the best vitamins can elp promote lung health.

N-Acetyl Cysteine
Research suggests that NAC levels may drop with age, which could lead to oxidative stress within brain cells - a conspicuous suspect in neurodegenerative disorders such as Alzheimer's and Parkinson's.

NAC can also break up trapped mucus and enable its clearance from the bronchial passages, improving the flow of air in and out of the lungs of people who have COPD. Additionally, NAC is the precursor of glutathione – one of the major antioxidants in lung tissue. Although the mucus-clearing effect of NAC occurs mainly when the compound is administered during inhalation, oral NAC has repeatedly been shown to prevent flare-ups in people who have chronic bronchitis.

According to a study in the European Respiratory Journal, supplmentation of N-Acetylcysteine (NAC) can reduce the need for hospitalization among people suffering from chronic obstructive pulmonary disease (COPD),

In the study, 1,219 people who had been hospitalized for COPD were observed for an average of nine months after they were discharged from the hospital. Those who were prescribed NAC were approximately one-third less likely to be readmitted to the hospital, compared with those who were not given NAC. The risk of hospitalization decreased with increasing doses of NAC. Excluding those who were prescribed less than 400 mg per day, treatment with NAC was associated with an 85% reduction in the rate of readmission.

Vitamin A
One of the most important functions of Vitamin A is to repair and re-build all the internal mucosal membranes - from the top orifice to the bottom one. For this reason, Vitamin A is recommended for sinus problems, leaky gut syndrome, and even interstitial cystitis. Vitamin A is helpful for anything related to internal mucous membranes.

In these days of ever-increasing air pollution and the spread of airborne bacteria and viruses, it is important to realize that the lining of the sinuses and lungs is the first line of defense. For this reason, Vitamin A is essential for protection against colds, influenza and infections of the kidneys, bladder, lungs and mucous membranes.

Vitamin C
Vitamin C was identified in the early 1900s as a remedy for scurvy - a serious disease of sailors. Starting in the 1930s, German and US physicians proposed that vitamin C would be beneficial in the treatment of pneumonia. Although the burden of pneumonia has decreased dramatically in developed countries during the past century, lung infections are still a leading cause of mortality globally. Many infections, including pneumonia, result in reduced Vitamin C levels in plasma, leukocytes, and urine. Because of these changes in metabolism, Vitamin C might have a therapeutic effect on pneumonia patients. Thus, there is a biological rationale to examine the effect of Vitamin C on infections in humans.

The researchers agreed that a diet of foods rich in Vitamin C would likely to be beneficial for lung health. By reducing the amount of decline in lung functions over time, consuming ample amounts of these foods could lower the risk of COPD. COPD can be due to chronic bronchitis, emphysema, or both. Risk factors for COPD include history of smoking or passive smoke exposure, allergy and asthma, exposure to environmental pollution, recurrent respiratory illness, or a family history of chronic bronchitis or emphysema.

Vitamin D
Many people associate Vitamin D strictly with bone health. However, Vitamin D is also important for immune health, hormone production, and lung health. According to a research published in the May 2011 issue of the American Journal of Respiratory and Critical Care Medicine, Vitamin D deficiency can lead to poor lung function.

Vitamins B-6 and B-12
Vitamin B6 is also known as pyridoxine. Vitamin B6 has been studied for the treatment of many conditions, including anemia (low amounts of healthy red blood cells). A new study has shown that Vitamin B6 appears to reduce the risk of lung cancer in smokers and nonsmokers alike by providing higher blood levels of the amino acid methionine.

Vitamin B12 can be found in foods such as meat, fish, and dairy products. It is used for treating and preventing Vitamin B12 deficiency that could cause perniciousanemia. Vitamin B12 is also used to relieve asthma, allergies, and skin infections.

Coenzyme Q10, Ginger Extract, and Turmeric Extract
Coenzyme Q10 (CoQ10) is similar to a vitamin. It is found in every cell of the body. The body makes CoQ10, and the cells use it to produce energy that the body needs for cell growth and maintenance. It also functions as an antioxidant, which protects the body from damage caused by harmful molecules known as free radicals.

Ginger is an herb. The rhizome (underground stem) is used as a spice as well as a medicine to improve conditions on many diseases. Ginger is used here for its anti-inflammation effect on upper respiratory tract infections, cough, and bronchitis.

The Turmeric plant boasts powerful anti-inflammatory properties. It is used to fight bronchitis, colds, lung infections, and fever among many other things.

Hawthorn Berry Extract and Elecampane Root
Hawthorn, another powerful antioxidant, is used for cardiovascular health. Hawthorn can improve the amount of blood pumped out of the heart during contractions, widen the blood vessels, and increase the transmission of nerve signals. It can relax the tiniest lung blood vessels and increase blood flow farther from the heart, due to a component in hawthorn called proanthocyanidin.

Elecampane, also known as horse heal and marchalan, is a plant commonly found in Great Britain, central and southern Europe, and in Asia. Elecampane has long been valued as an effective respiratory support herb, even being listed in the U.S. Pharmacopeia.

Traditional Chinese and Indian Ayurvedic medicine use elecampane for bronchitis and asthma, as did ancient Greeks and Romans. In the 1800's, lozenges, candy, and cough drops were all produced from elecampane root.

Elecampane acts as an expectorant, anti-tussive, sedative, anti-fungal, relaxing, warming, and anti-microbial. It can also soothe bronchial tube linings. For this reason, elecampane is beneficial in supporting any respiratory condition which produces copious mucus discharge.