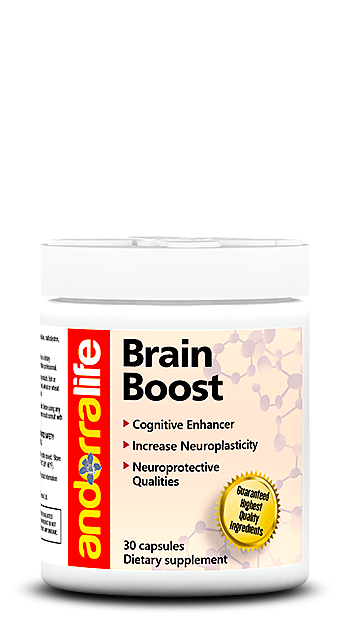 Power up your brain and improve focus, clarity, and memory.

Natural Huperzine Extract Powder
Huperzine is an extract purified from a plant called Chinese club moss.  Huperzine has been used for Alzheimer's disease, memory, learning enhancement, and age-related memory impairment. It is also used increasing alertness and energy, treating the muscle disease known as myasthenia gravis, and for protecting against agents that damage nerves.

N. Acetyl Cysteine
Research suggests that NAC levels may drop with age, which could lead to oxidative stress within brain cells - a conspicuous suspect in neurodegenerative disorders such as Alzheimer's and Parkinson's.

Vinpocetine
Vinpocetine may improve blood flow to the brain. It is used for enhancing memory and preventing Alzheimer's disease, and other conditions that harm learning, memory, and information processing skills as people age.

AndorraLife Brain Boost is a cognitive enhancer that helps improves reasoning, memory, learning, and focus. Another benefit is its neuroprotective affect to help protect nerve cells from damage and degeneration.