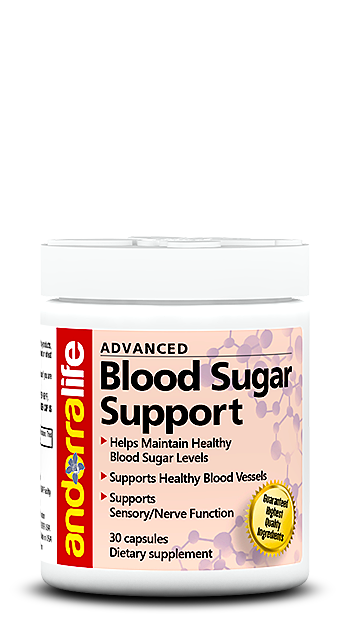 Balanced blood sugar is critical for the body to function properly, as it maintains healthy blood vessels, optimal circulation, and nerve functions. Persistently elevated blood sugar levels lead to Diabetes, which damages the body and can lead to the multiple health problems.

A normal sugar level is currently considered to be less than 100 mg/dL when fasting, and less than 140 mg/dL two hours after eating. But in most healthy people, sugar levels are even lower.

High blood sugar (Hyperglycemia) is caused by many factors:

AndorraLife's Advanced Blood Sugar Support is formulated with the finest ingredients which aid in the support of healthy blood sugar levels, enhances brain activity and mental clarity, and supports anti-aging.

Alpha Lipoic Acid (ALA) Studies show that ALA significantly improves insulin stimulated glucose uptake in patients with type II diabetes. Not only does it help lower blood sugar levels by reducing the secretion of insulin, it also increases insulin sensitivity at the cellular level and thus, even LESS insulin is required.<

Cinnamon Powder Cinnamon powders may help improve glucose and lipids levels in patients with Type II diabetes, according to a study published in Diabetics Care.

The authors in the study concluded that consuming up to six grams of cinnamon per day reduces serum glucose, triglyceride, LDL cholesterol, and total cholesterol in people with Type II diabetes, and that the inclusion of cinnamon in the diet of people with Type II diabetes will reduce the risk factors associated with diabetes and cardiovascular diseases.

In addition, cinnamon extract can reduce fasting blood sugar levels in patients, as reported in the European Journal of Clinical Investigation.

Berberine
This plant alkaloid and naturally occurring compound found in the roots, rhizomes, and stem bark of various plants works by targeting a key regulator of metabolism – the AMP-activated protein kinase (AMPK) enzyme. AMPK regulates glucose uptake along with the synthesis of glucose transporters which move glucose out of your blood and into the body's cells, where it is converted to energy. Berberine may also increase the number and activity of the insulin receptors, promoting insulin sensitivity. Additionally, AMPK facilitates the burning of fatty acids in your cells, which is why it is a powerful tool for helping blood lipid levels in check.

Chromium This essential trace element is required for normal fat and carbohydrate metabolism and healthy glucose tolerance. Chromium may help promote insulin sensitivity by increasing the number of insulin binding sites on cells, which allow for better transport of glucose into cells for energy.

Pyridoxamine is a specialized form of vitamin B6 which is easily converted in the body to pyridoxal 5-phosphate (PLP), the active form of the vitamin. Pyridoxamine may help prevent diabetic complications by blocking formation of advanced glycation end products (AGEs), and advanced lipoxidation end products (ALEs) which are the underlying loss of structure and function due to aging. AGEs are implicated in diabetes-related conditions including kidney disease (nephropathy), vision loss (retinopathy), and neuropathy. It has been described as the most potent natural substance for inhibiting AGE formation.

Vitamin B12 Vitamin B12 supports the digestive system in keeping glucose levels stable by binding to protein in food. The activity of hydrochloric acid and gastric protease in the stomach releases Vitamin B12 from its protein. Once it is released, Vitamin B12 begins to work quickly. B12 deficiency can cause neuropathy –  permanent nerve damage, which is a common problem for people with diabetes who are experiencing pain, tingling, and numbness in their arms, hands, legs, and feet, resulting in sores.