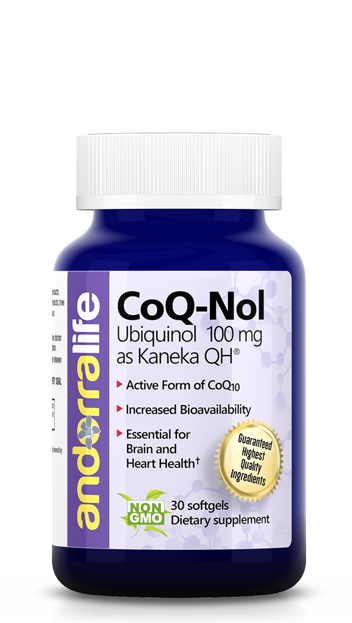 Coenzyme Q-10 (CoQ10) is a vitamin-like substance required for the proper function of many organs and chemical reactions in the body - specifically the heart, liver, kidney, and pancreas. CoQ10 is found in small amounts in meats and seafood. For this reason, CoQ10 supplements are highly recommended for vegetarians.

Ubiquinone and Ubiquinol - Two basic forms of CoQ10.
The body needs ubiquinone - the most widely recognized form of CoQ10 that converts itself into the usable form known as ubiquinol. Research has revealed that ubiquinol levels are greatly reduced in cancer and heart disease patients. Levels are also low in patients with neurological and liver conditions. Without enough ubiquinone and ubiquinol, the body becomes susceptible to age-related fatigue, and does not have the cellular energy to defend against oxidative stress. The body also loses its ability to create collagen and elastin - substances that are necessary for cellular repair.

It is believed that low levels of CoQ10 put the body at higher risk for disease. For this reason, supplementing can help protect the body.

CoQ10 is a large, fat-soluble molecule which makes it difficult to absorb. AndorraLife's CoQ-NOL 100 combats CoQ10 with its 100mg of water-soluble Ubiquinol, which is absorbed into the bloodstream for immediate use. It provides 800% or higher CoQ10 to the bloodstream than conventional Ubiquinone forms, and achieves therapeutic levels of CoQ10 in just weeks.

CoQ-Nol 100 by AndorraLife has been clinically tested on humans, and is the preferred dosage form of Coenzyme Q10 recommended by physicians and cardiologists.